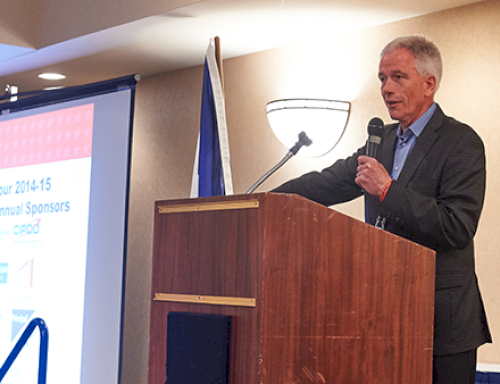 Wes Ehrecke had a simple but powerful message for the Leadership Iowa 2014-15 class at its graduation last year: Leaders make things happen.

“Leaders truly should always be thinking about how to make things happen — for their own company, for their profession and in other ways,” he said. Ehrecke, who has served in a wide variety of community and statewide leadership roles, is the 2016 recipient of the Leadership for Iowa award given by the Iowa Association of Business and Industry Foundation.

Ehrecke, a Durant native, has served in leadership positions in several statewide organizations, including the Iowa Bankers Association and the Iowa Association of Electric Cooperatives. He has directed the IGA since its inception about 17 years ago.

“The way Wes has represented those industries — banking and finance, utility and gaming — he not only has committed himself in the most professional and ethical way to representing those interests and the needs of those industries, but he’s always done that with an eye on the greater common good and what was good for Iowa and its communities,” said Rand Fisher, president of the Iowa Area Economic Development Group, who nominated Ehrecke for the award.

Ehrecke’s organization has played an important role in helping distribute donations from Iowa casinos to county foundations throughout the state. The development of those foundations has served as a catalyst for more local giving, Fisher and Ehrecke said.

In addition to his professional roles, Ehrecke has provided leadership to numerous foundation and civic boards, including Leadership Iowa, the Iowa Parks Foundation, the Iowa State University Greenlee School of Journalism, the St. Francis Pastoral Council, the Iowa 4-H Foundation and the Make-AWish Foundation, among others.

“I know it sounds cliché, but with a lot of these things, the more you give, the more you receive,” Ehrecke said. “I’ve had the opportunity to be involved in a lot of different things and have gotten to know a lot of people as a result of that.”

Ehrecke joins a prestigious group of Iowa business and civic leaders who have received the Leadership for Iowa award. Recipients must demonstrate a commitment to serve Iowa, serve in a leadership position in employment or volunteer organization that results in the potential to contribute to leadership development in a local or statewide setting, have demonstrated the ability to undertake a leadership role on difficult or controversial subjects, and be involved in projects designed to enhance the quality of life in Iowa.